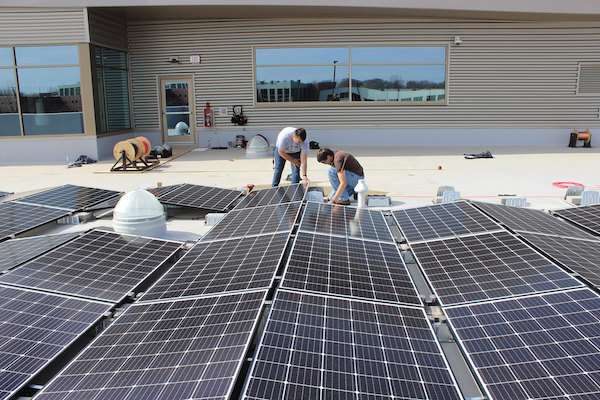 The challenge of climate change is immense, and Wisconsin is seeing the impacts. It’s really important our state tackles this issue and helps local communities prepare for the effects we’re already experiencing if we want to leave our planet a safe place for our kids. Addressing climate change is our priority at Clean Wisconsin, and new state leadership has brought the possibility for real change on this critical topic.

Gov. Tony Evers Lt. Gov. Mandela Barnes are helping establish Wisconsin as a leader in the Midwest on efforts to tackle climate change. The governor joined the U.S. Climate Alliance, a group of 25 states committed to reducing greenhouse gas reductions, despite President Trump pulling the U.S. out of the 2015 Paris Climate Accord. In August the governor signed an Executive Order committing Wisconsin to a goal of being 100% carbon free by 2050. Most recently, the governor has formed a Climate Change Task Force, and I was thrilled to be invited as a member.

This Task Force will play a big role in shaping how we deal with climate change in Wisconsin. It will be chaired by Lt. Gov. Mandela Barnes and will include state agencies, lawmakers, environmentalists and conservationists, utilities, agriculture, tribal representatives, insurance, industry, youth activists, and diverse voices to ensure our approaches to climate change are equitable.

The Task Force will hold public hearings around the state, as well as assess research, review current climate actions, consult with tribal governments, and work with the UW system. We will then present a list of policy and legal recommendations to the governor by next fall.

Clean Wisconsin will be a strong voice for aggressive actions to address climate change as part of the Task Force. Members of our staff also have seats on the Dane County Council on Climate Change and the Milwaukee City-County Task Force on Climate and Economic Equity. In fact, we are the only group to sit on all three task forces, so will be able to bring a strong and consistent perspective to the table.

It’s refreshing to have this kind of leadership in our state. Gov. Evers’ efforts stand in stark contrast to former Gov. Scott Walker, who sued to stop the Clean Power Plan, scrubbed information about climate change from the DNR’s website, and cut science positions because they dared research how climate change is impacting Wisconsin communities. While climate change poses a serious threat, it also presents a real opportunity to transform our state by promoting clean energy, boosting our economy, and creating jobs. It’s incumbent upon all decision-makers to take this issue seriously and join Gov. Evers in this effort to solve this environmental challenge and move our state into the 21st century.

The Task Force plans to travel around the state to hear from concerned residents and people feeling the impacts of climate change like flooding, health, and economic disparities. I look forward to hearing your stories to inform our efforts to advocate for the kind of aggressive solutions our state needs to tackle climate change.

Climate change isn’t an issue that will go away on its own. We need to take collective action to curb carbon emissions and prepare Wisconsin communities for the impacts. I look forward to being a member of the Task Force and the great work that will come out of it, and how it will move Wisconsin forward.

Your personal information is safe with us, but if you’re inclined, you can read our Privacy Policy here.