Clean Power Plan: A new plan, a new path, a multitude of benefits 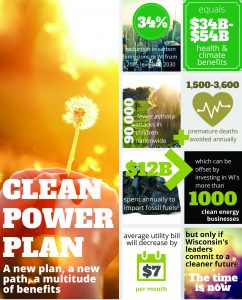 The Environmental Protection Agency (EPA) released its final Clean Power Plan (CPP) on August 2. The CPP is a historic step for the United States as it sets the first-ever limits on carbon pollution from power plants, the largest sources of the emissions that lead to climate change. According to EPA, the CPP will reduce carbon pollution emissions in the U.S. by 32% below 2005 levels by the year 2030. While individual states still need to establish their plans for reducing carbon, the CPP will become law once it is published in the Federal Register.

Clearly, the CPP presents many opportunities and benefits, both for Wisconsin and the nation.

There is no question that the CPP will have very significant health benefits for Americans. According to EPA, the CPP will annually avoid between 1,500 and 3,600 premature deaths, 90,000 asthma attacks in children, and up to 1,700 heart attacks. EPA places the public health and climate benefits between $34 billion and $54 billion, far outweighing the projected compliance costs of $8.4 billion.

Despite the costs associated with upgrading existing fossil fuel power plants and developing new sources of carbon-free renewable energy, EPA projects that the average utility bill will decrease by about $7 per month by the time the CPP is fully implemented in 2030. This decrease is a result of the enormous potential that energy efficiency investments have in reducing electricity consumption and carbon emissions, which translates into significant benefits for consumers and the environment.

EPA made the rule very flexible for each state to comply as it sees fit. While Wisconsin’s reduction target is 34% by 2030, utilities and state regulators have an enormous amount of flexibility in how to achieve that reduction. For instance, energy efficiency, which is widely recognized as the least-expensive way to reduce emissions, has the potential to play a huge role in Wisconsin’s plan to meet the 34% reduction. Wisconsin is well positioned to achieve higher levels of efficiency (and lower energy bills) thanks to Focus on Energy, our robust statewide energy efficiency program. The state could easily make additional investments in this very cost-effective program, allowing a plethora of strong, Wisconsin-grown energy service companies to deliver substantial energy-efficiency savings to businesses and homeowners.

Another important way the CPP will boost Wisconsin’s economy is through reduced fuel costs. Wisconsin imports more than $12 billion worth of fossil fuels each year from other states and countries. By reducing our dependency on imported fossil fuels, Wisconsin will keep some of that money here and become more energy independent. Rather than sending our money to Wyoming or Canada, we can invest in Wisconsin farms that host biodigesters or wind turbines, the Wisconsin businesses that build and maintain those clean renewable sources, and the businesses that manufacture and install high-efficiency lighting and other energy efficiency services.

Clearly, the CPP presents many opportunities and benefits, both for Wisconsin and the nation.

These benefits and opportunities, however, are not obvious to everyone. Within hours of the final rule being unveiled, Governor Scott Walker and Attorney General Brad Schimel announced they were joining other states in a lawsuit against EPA in an attempt to block the CPP. It’s concerning that Gov. Walker and AG Schimel clearly didn’t take time to read the new proposal before they launched their opposition. It is truly sad to think political aspirations would trump public health, environment and economy, and the future world they will leave for their children and ours.

The next step in the process is for states to convene stakeholders and develop a plan to implement the CPP, due in September 2018. In Wisconsin, the DNR is legally responsible for developing that state-level plan, but it has not yet laid out a timeline. As of this writing, the DNR remains undecided if it will even develop a state plan. If a state does not write its own plan, EPA will give the state a generic federal plan, which will have no input from Wisconsin stakeholders and is bound to have limited compliance options. For example, it is possible that a federal plan would not allow energy efficiency to be a compliance measure, which would be a huge blow to ratepayers. Most other states are have already announced or even begun their stakeholder processes. Minnesota, for example, began its process 10 months ago.

While the Governor’s lawsuit seems politically motivated and a lack of action by DNR could ultimately hurt Wisconsin ratepayers, there are bright spots in this picture.

For instance, Wisconsin utilities have had a very reasonable and practical response to the CPP and are getting together with state officials and environmental groups to determine how to meet the reduction targets at the lowest cost for their customers. We applaud their reaction, as we have been working with some of the biggest coal-based utilities in the Midwest since we first approached them in 2011. Through this ongoing collaboration, Midwest utilities (including most Wisconsin utilities) and advocates have worked together to present a joint voice and make suggestions to EPA on how to improve the rule. We have submitted three sets of joint comments to EPA on the rule. Despite our differences, we have found more that we agree on than that we disagree on. Our collaborative effort to shape the rule has paid major dividends for Wisconsin ratepayers already and will continue to do so if the Governor and the DNR give utilities and advocates the opportunity to work collaboratively on the state plan and find the best path forward to carbon emission reductions for the state of Wisconsin.