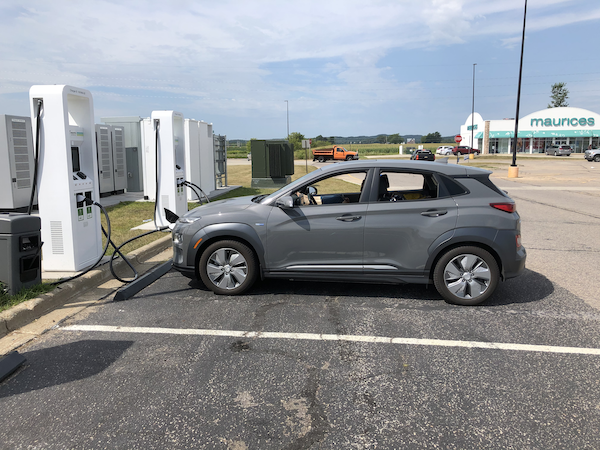 The widespread adoption of electric vehicles (EVs) is a critical step in weaning our state off our unsustainable and unhealthy use of fossil fuels that drives local air pollution and global climate change.

One of the main barriers to expanding EV use is access to charging. While most charging currently occurs at home, the availability of public fast charging is paramount in helping more drivers to switch to electric. All Wisconsinites – whether they live in an urban or rural area, own a home or rent – should have the option of driving an EV. But to do that, EV owners across the state need to be able to travel with the confidence that they can charge their vehicles as easily as they could fill a tank of gas. Renters aren’t able to install an EV charger where they live; instead, they depend on reliable public charging options – and those options are severely limited.

There are currently about 550 public charging outlets across the state of Wisconsin. Public charging locations are funded by a mix of government, utility, and private investments. This limited charging infrastructure is one key factor in why the market share of electric vehicles in Wisconsin is so low – less than 1%. Meanwhile, California leads in the U.S. where electric vehicles represent over 7% of sales. Electric sales are growing in Wisconsin – about 18% from 2017-2018 – but over that same time period we saw bigger leaps by our neighbors – 87% in Minnesota and 94% in Illinois. When our charging infrastructure is lacking, especially compared with our neighbors, we hinder range confidence and risk harming tourism opportunities. Roadtrippers need to know they can power their vehicle on their travels, and if they lack public charging on their desired routes they’ll have to make alternative travel plans to places that have invested in convenient and reliable charging corridors.

Failing to adequately fund EV charging infrastructure also misses an opportunity to improve community health, particularly in the vulnerable neighborhoods along major transportation corridors and communities of color that are disproportionately subjected to poor air quality. In Wisconsin, about a quarter of our energy is used in transportation, most of which is derived from fossil fuels that pollute our air and warm our climate. Exposure to the tailpipe emissions from gasoline and diesel vehicles lead to a host of negative health outcomes, including increased risk of asthma and cancer. While electric vehicles don’t eliminate emissions (unless they’re charged with a zero-emissions electricity source), they displace the emissions from the tailpipe to the powerplant, so heavily trafficked communities aren’t breathing that polluted air. From a climate impact standpoint, even with today’s coal and gas dominated electrical grid, driving an electric vehicle is still better than driving a conventional car. And as we transition to carbon-free electricity – which we’re on track to do because of the plunging costs of renewables and ambitious goals set by our Governor and major Wisconsin utilities – the benefits to our environment and health will only increase.

However, Wisconsin is still underinvesting in public EV charging. Unfortunately, EVs experienced a major setback in the Wisconsin Supreme Court’s recent ruling which eliminated a substantial pot of money that had been earmarked for public EV charging infrastructure in Wisconsin. Governor Evers had allocated $10 million of the remaining Volkswagen settlement funding from the emissions cheating scandal to EV charging in a budget veto which was deemed unconstitutional in the July Supreme Court decision. But there are still many paths forward for investing in EV charging. For example, after months of discussion with Wisconsin stakeholders, the statewide Task Force on Climate Change will deliver final recommendations for bold and equitable climate action to the Governor by the end of October. While the recommendations are still being finalized, promotion of electric vehicles including a robust network of public charging infrastructure will likely be included in the package.

Wisconsin can be a leader in clean transportation. A critical piece of that puzzle is transitioning to more electric vehicles, and to do that we need more public charging. An investment in EV charging is an investment in our collective health, economy, equitable mobility access, and environment. It’s time to plug into our full potential.