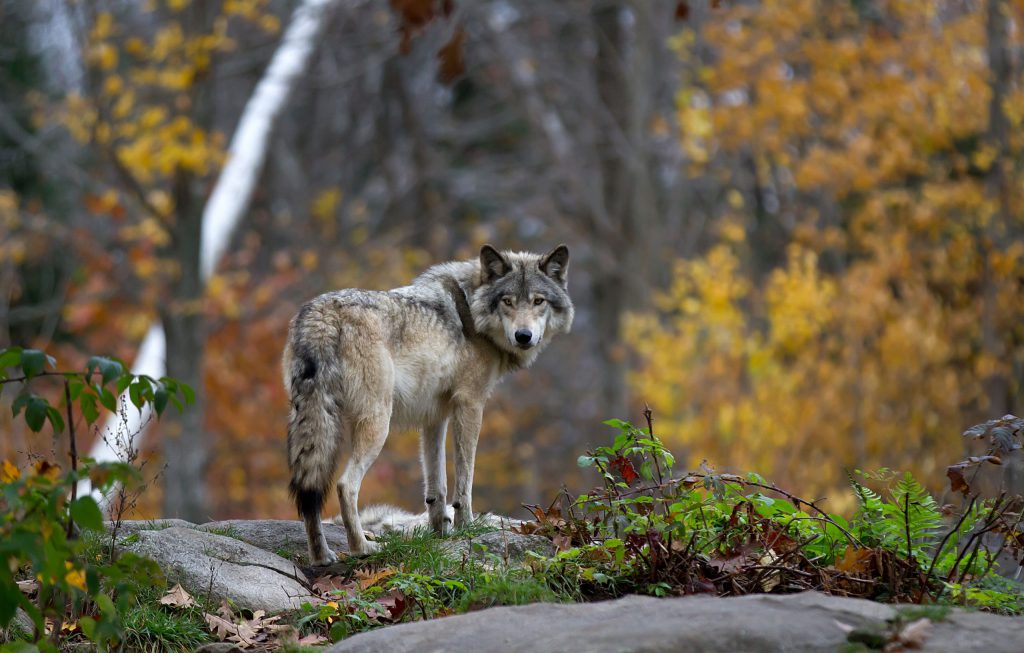 Blog, As Seen in the Defender, Science: Under the Lens
November 22, 2021, By Paul Mathewson

Wolves have been in the news recently with the controversial quota-setting process for Wisconsin’s wolf hunt. Here we take a look at wolves in our state.

Gray wolves are the largest Canid (the dog family, including coyotes and foxes) in Wisconsin, measuring 5 to 6 feet long nose to tail and weighing 50 to over 100 pounds. Wolves can be distinguished from the more widespread coyote by their size (wolves are about 30% longer and taller and twice as heavy) and by facial features. Wolves have wide faces with blocky snouts and relatively small ears. Coyotes have narrow faces with pointy snouts and relatively large ears.

Wolves are highly adaptable to different ecosystems and ranged throughout the country prior to European arrival. Here in Wisconsin, an estimated 3,000-5,000 wolves lived throughout the state prior to Euro-American settlement. In the southern parts of the state where prairie and open savannahs were the dominant ecosystem, wolves likely preyed on bison and elk. In forested central and northern areas of the state, white-tailed deer, caribou, and moose were the primary food source.

Years of persecution fueled by conflicts with livestock and fear of human attack followed Euro-American settlement, leading to the elimination of wolves from the state by 1960. In the Great Lakes region, the only remaining wolves were found in the far northeastern Minnesota wilderness and Isle Royale in Lake Superior. Wolves were killed off in large part due to governmental bounty programs and deliberate poisoning campaigns. Indirect impacts such as habitat loss (forest harvesting, conversion to agricultural land) and overhunting of prey also contributed to the loss of wolves in Wisconsin.

Wolves were listed on the Endangered Species Act in 1967, and following this legal protection, wolves began recolonizing their former range, returning to Wisconsin by the mid-1970s. The combination of legal protection, more favorable public opinion and a rebounded white tailed deer population, Wisconsin’s wolf population has been able to expand. In 1980, there were 25 individuals, and this number grew slowly to 83 individuals by 1995. Between 1995 and 2012, the population grew by over 12% annually up to 815 individuals.

This population growth was accompanied by legal wrangling over the protected status of the species. In 2003, gray wolves were briefly upgraded to “threatened” before being relisted as “endangered” in 2005. The population unit that includes Wisconsin’s wolves was delisted and then subsequently relisted in response to legal challenges in 2007 and 2009. Another delisting occurred in 2012, and at this point the Wisconsin legislature mandated a recreational wolf hunting program. This hunt was carried out for a couple years before the wolf was again relisted in 2015 but not before wolf numbers had been reduced by 20%. Following renewed legal protection, the population increased to 1034 individuals in 2020 before a final, current, delisting of all wolves in the lower 48 states occurred in 2019, handing management over to the states.

In February 2021, Wisconsin allowed a wolf hunt intended to kill 119 wolves, a number determined by State officials to be a sustainable harvest that would not affect the state’s population. In less than three days, 218 permitted kills were recorded, overshooting the target by 80%. A published analysis also estimated that another 100 wolves were killed (e.g., by poaching) that would not have occurred had the wolf retained legal protection under the Endangered Species Act. Combined, these deaths reduced the population by a minimum of 30%, leaving at most 750 wolves alive in the state as of April 2021.

Wisconsin wolves are found in forested areas with low human density in the central and northern parts of the state, where there is sufficient deer and other prey like beaver and hare. An analysis of preferred wolf habitat found that the two primary predictors of wolf habitat are low road density and lack of agricultural land. This indicates that wolves prefer to avoid humans as much as possible, and with good reason. Analyses of Wisconsin wolf mortality in time periods when wolves were legally protected found that human causes were responsible for about 2/3 of wolf mortality annually. Most of this was from poaching (40% of deaths) and vehicle collisions (10% of deaths).

As is the case with large predators around the world, wolves are a controversial species due largely to conflict arising from livestock depredation. As Wisconsin’s wolf population has increased, so have complaints. No human attacks have been recorded in Wisconsin, and this conflict is largely from livestock depredation and hunting dog killings. Wolves are also responsible for farmed deer and pet dog killings (an average of <1 deer and 2 pet dogs per year over the past 5 years). Since the 1980s, the Wisconsin DNR has compensated owners for verified wolf depredation and attacks, paying an average of $167,000 annually over the past 5 years.

On the other hand, wolves have significant cultural importance to some, and others benefit from observing them or just knowing they are there. A recent study also reported a direct economic benefit wolves: wolf presence reduces deer-vehicle collisions by 24%, providing an economic benefit of $11 million annually (more than 60 times the annual damage payments). This reduction is not due to wolves reducing deer populations. Rather, wolves use linear features like roads for more efficient traveling, causing deer to avoid these areas and thereby reducing risk of collision.

Wolves are also apex predators meaning that they play an important role in ecosystem structuring through controlling populations of herbivores (indirectly preventing vegetation overbrowsing) and smaller carnivores like coyotes (indirectly impacting smaller mammal populations). This “trophic cascade” impact has been well-studied in the greater Yellowstone ecosystem. For example, in the absence of wolves, elk were overbrowsing vegetation. When wolves returned, their elk predation allowed aspen and willow regrowth, improving habitat for other species. Similar trophic cascade impacts have also been documented here in Wisconsin following recolonization of the state.

Wisconsin’s wolves are some of the best studied wolves in the world, providing a good knowledge base to inform management decisions that appropriately balance the interests of wolves and those of people who live with them. Hopefully good, science-based decision making will allow us to continue to point to wolves as an endangered species success story in the state.