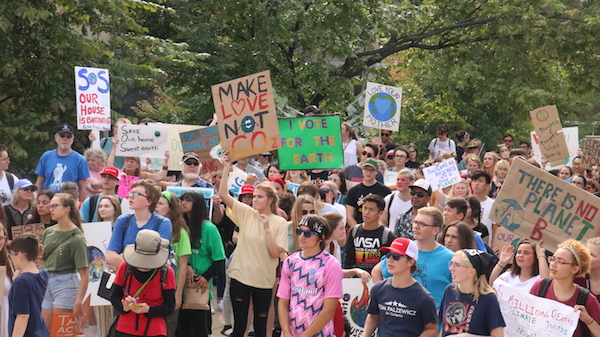 On a warm Friday in September, the streets of downtown Madison became the backdrop for a generational movement.

Madison police estimate a “few thousand” people marched to the state capitol on September 20th as part of the Youth Climate Strike, a global demonstration demanding action on climate change.

“It’s really motivating to see,” said Sam, a freshman at the University of Wisconsin-Madison. “We don’t have much time, and there’s a lot that needs to get done. And I think if politicians don’t see a large number of people mobilized, then nothing is going to get done.”

According to the environmental advocacy group 350.org, a co-organizer of the demonstration, more than 4 million around the world participated in the strike. That number is particularly remarkable given that the movement began less than a year ago, when then 15 year-old Greta Thunberg staged a two week strike outside of the Swedish parliament.

Since then, the Youth Climate Movement has spread to more than 150 countries, and Thunberg herself has become an international celebrity, who routinely speaks in front of world leaders.

“I think she’s brave for starting this on her own,” said Suraya, a Madison West High School sophomore and a member of the Wisconsin Youth Climate Action Team (YCAT), which organized the Madison event. “She really inspired people. I think she had a lot to do with this global shift we’ve seen over the past year. Because for a long time people were ignoring climate change.”

Already in his first months in office, Gov. Tony Evers has repositioned the state to tackle climate change and advance clean energy by outlining a goal of carbon-free energy by 2050 and establishing an Office of Sustainability & Clean Energy.

With dropping costs of renewable energy such as wind and solar, which are now cheaper than natural gas and coal, utilities have also made significant pledges to retire fossil fuel electricity generation in favor of clean energy options.

Additionally, local communities around the state have made similar efforts to curb carbon emissions by committing to clean energy goals and enacting energy efficiency measures.

At one time, these initiatives may have seemed entirely unattainable. But youth climate activists are hopeful that the rapidly expanding movement can bring needed attention to the climate issue, pushing elected officials to take even greater action.

“There’s definitely hope,” said Sam. “And I think the rebirth of the strike as a tool is really heartening to see. And I think the more people strike, the more often, the more politicians are going to have to listen to us.”

A growing number of adults have also signed onto the movement, including Randy Kisling of Middleton, who showed up to the Youth Climate Strike to express his concern about Wisconsin’s changing weather patterns.

“It’s a great thing to see all these people here,” said Kisling. “It’s an urgent cause that they’re involved with. The weather is becoming more extreme. That’s the most obvious thing.”

Suraya says the changes to the state’s climate and environment are becoming more obvious in her life too.

“I see the polar vortex. I see days when no one can go swimming in our lakes because there’s so much algae from the pollution. I see the record flooding and rainfall last year. It’s everywhere you look.”

She now hopes her generation will be able to force the changes that past generations have failed to make.

“I think people need to shift the way they think, but also corporations need to switch to green energy now. We are running out of time.”