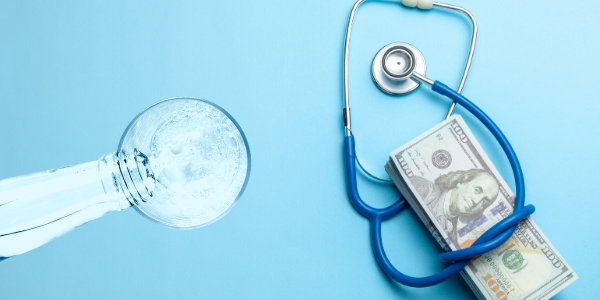 Nitrate is the most widespread groundwater contaminant in the state. While septic systems and wastewater contribute to the problem, the majority (90%) of nitrates come from agricultural sources, such as fertilizer and manure.

The drinking standard in the U.S. of 10 parts per million (ppm) was established in the 1960s to protect against methemoglobinemia, also known as blue baby syndrome, a serious condition in which excess nitrates interfere with an infant’s blood’s ability to carry oxygen. Fortunately, there are few reported cases of methemoglobinemia: a Wisconsin study reported eight diagnosed cases in the state between 1990 and 1999.

Last summer, the Environmental Working Group (EWG) published a paper describing a model to estimate the number of cancer cases and adverse birth outcomes that could be attributed to drinking water contaminated with nitrates. This model relies on epidemiological studies that have looked at populations and found an increased risk of health problems above various nitrate concentrations. Applying the model nationwide, EWG estimated that between 2,300 and 12,500 cases of cancer and over 4,500 adverse birth outcomes could be attributed to nitrate-contaminated drinking water each year.

Given the widespread nitrate contamination in Wisconsin, we were interested in applying the model to Wisconsin specifically to see what health burden nitrate exposure is imposing on the state.  In order to apply the model, we needed to estimate the number of people in the state who are drinking water with nitrates above certain threshold concentrations identified in the epidemiological studies.

Nitrate concentrations in public water supplies were obtained from the reports of routine testing required of community water system. For private well concentrations, we used two estimates, since there is no standardized testing of private wells in the state. First, we used nitrate concentrations measured in a Department of Agriculture, Trade and Consumer Protection survey intended to be representative of groundwater quality around the state. Second, we used nitrate tests submitted to the Department of Natural Resources as required for new wells or existing wells needing maintenance.

Using this model, we estimate that 120-300 cases of cancer and over 70 adverse birth outcomes each year could be attributed to nitrate-contaminated drinking water in Wisconsin.  This results in direct medical cost estimates of between $16 and $40 million per year, along with potential additional lost productivity costs of $63-$160 million per year.

The range of values reflect the different findings regarding the relative risk of nitrate exposure in the epidemiological studies underpinning the model, as well as variation in private well contamination estimates from the two datasets we used.

Regardless of the range, even one additional case of cancer or adverse birth outcome is one too many since everyone should have access to clean and safe drinking water.

Our research puts a number on the nitrate pollution crisis being felt around the state, further impressing upon state decision makers to find a solution to this problem. Not only is this a serious threat to human health, but it has a major impact on our state’s economy. The longer we wait, the harder and more expensive it becomes to solve this issue.

Above all, each day without a solution also means that the health and wellbeing of real people around the state are at risk. That alone should be enough of a reason for action.