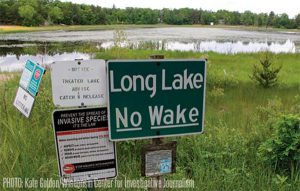 Feeling growing public opposition to Senate Bill 76, Assembly Republicans rushed to pass the measure, which strips the ability of DNR to review high capacity well permits that are being repaired, replaced, reconstructed or transferred regardless of impacts to nearby private wells or lakes, rivers streams and wetlands. In some areas of the state, most notably the Central Sands where the presence of high capacity wells has grown exponentially, and once waterfront properties are now mudfront properties.

“Legislators who voted to support this bill today sent a strong message that the public’s water can be given away for private benefit – regardless of the impacts to our natural resources,” said Clean Wisconsin’s Amber Meyer Smith, Director of Programs and Government Relations.

“This bill completely ignores what is really happening in some areas of our state that are already being impacted by unsustainable levels of groundwater pumping from high-capacity wells,” Smith added.

The courts have ruled the DNR must manage the waters of Wisconsin for the mutual benefit of all users in accordance with the state constitution.

Clean Wisconsin and the Pleasant Lake Management District are suing the DNR over the agency’s failure to act on its duty to protect nearby water bodies from the impacts of eight high-capacity wells in violation of its Constitutional obligation to protect the natural resources the citizens of Wisconsin entrusted it.

A recent Clean Wisconsin review of dozens of high-capacity well permits from around the state showed how Attorney General Brad Schimel’s flawed 2016 legal opinion created a massive water grab, allowing high-capacity well permit-holders to pump enormous quantities of water despite well-documented analyses from the agency’s own scientists about the likely impacts to natural resources and nearby private wells.

“To ignore the recently-revealed information that the state just gave away another 1 billion gallons of the public’s water is stunning,” Smith said. “We are calling on Gov. Scott Walker to veto this bill.”

Visit http://bit.ly/2oW0A5v to view a chart of the high capacity well permit modifications.