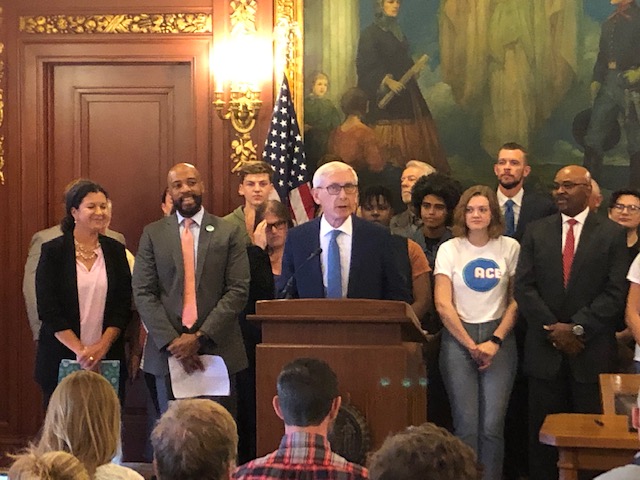 “This order by Gov. Evers sets the tone for state action on promoting clean energy and tackling climate change,” said Amber Meyer Smith, Vice President of Programs & Government Relations at Clean Wisconsin. “The governor is opening a new door that will lead to economic growth and jobs while protecting public health and curbing climate change. This is a game-changer for Wisconsin on multiple fronts.”

The executive order holds the state to a goal of using carbon-free energy for electricity by 2050. To reach that goal, the newly announced Office of Sustainability & Clean Energy will act as a hub to coordinate efforts by the state and utilities to meet clean energy goals and carry out the carbon reduction pledge outlined in the 2015 Paris Climate Accord.

In February, Gov. Evers signed onto the U.S. Climate Alliance, which commits the state to carbon reduction goals in the coming years. This executive order is the first major state action on climate change in over a decade. The measures signed by Gov. Evers were originally in his budget proposal, but were stripped out of the final budget by the Joint Finance Committee.

“Curbing climate change is a daunting task, and this action by the governor gives the state a path forward to cut carbon emissions while boosting our economy, creating jobs, and protecting the health of our kids,” said Meyer Smith. “It starts the needed conversation about how we will reduce our climate footprint and promote clean energy statewide.”

The governor’s action comes during a time of momentum by local governments, other states, and utilities to take efforts to promote clean energy and commit to carbon reduction goals. On July 16, the City of La Crosse passed a measure committing to 100% carbon-free electricity by 2050. A week later, the City and County of Milwaukee passed a resolution to form a joint city-county Task Force to move Milwaukee towards net zero carbon emissions by 2050 and create economic opportunity through green jobs. With La Crosse and Milwaukee’s resolutions, there are now seven cities in Wisconsin with carbon-free or carbon-neutral goals on the books.

Climate change impacts have already affected Wisconsin communities. Major flooding in 2018 left communities in every corner of the state underwater and caused billions of dollars in damage to homes, roads, and businesses.