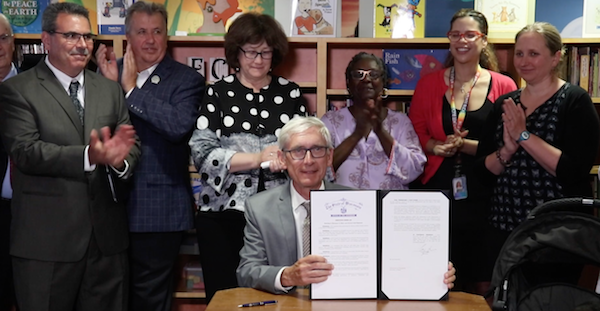 “Child lead poisoning is a real issue in every corner of Wisconsin,” said Carly Michiels, Government Relations Director at Clean Wisconsin. “Tackling lead pollution in drinking water requires a coordinated effort involving health and water experts at DNR and DHS. This is a big undertaking, and we applaud Gov. Evers for committing to eliminate lead pipes and protect public health, especially during the Year of Clean Drinking Water.”

There are roughly 176,000 lead service lines still delivering drinking water in Wisconsin. While the majority are in Milwaukee, lead pipes are a statewide issue: over 80 communities around the state still rely on lead service lines. The rate of lead poisoning in Wisconsin for children under 6 years of age is 5%, according to a 2016 Wisconsin Department of Health Services report on childhood lead poisoning.  The national average is 4%, according to the Centers for Disease Control and Prevention.

Earlier today, Sen. LaTonya Johnson (D-Milwaukee) and Rep. Kalan Haywood (D-Milwaukee) introduced a bill that would recommit that $40 million for lead pipe replacement around the state.

“There is no safe level of lead in a child’s blood,” said Michiels. “While many lawmakers refuse to solve lead pollution in drinking water, Gov. Evers and legislators like Sen. Johnson and Rep. Haywood are showing they’re committed to making sure everyone in Wisconsin has access to clean drinking water.”