On August 1, 2018, Clean Wisconsin sued the Environmental Protection Agency (EPA) in federal court, challenging a rule that exposes thousands of Wisconsin residents to ozone pollution. This unjust rule is just one in a series of Trump Administration policies that ignore air pollution at the cost of harm to public health.

Ground-level ozone (O3), often called “smog,” is an ambient air pollutant that harms our lungs and makes breathing difficult. Ozone forms from two precursors—nitrous oxides (NOX) and volatile organic compounds (VOCs)—which are emitted by mobile sources (such as cars and trucks) and stationary sources (such as power plants). When these precursors react in hot sunlight—when people are more likely to be outside—they form ozone. Inhaling ozone is particularly harmful for children, the elderly, and people with respiratory conditions. Ozone pollution can exacerbate and trigger respiratory conditions such as asthma, chronic obstructive pulmonary disease (COPD), bronchitis, and emphysema.

Beth, a practicing physician and Clean Wisconsin member since 2002, understands that people need clean air to live healthy, productive lives. “Ground-level ozone significantly damages people’s lungs—especially young kids. My patients, and all of us, need clean air for our communities and our young ones to lead healthy lives and thrive.”

Most parts of Wisconsin have exceptionally clean air, which allows us to enjoy our summers outdoors without sacrificing our health. In fact, many of our members have told us that they go outside constantly in the summer to exercise, garden, entertain, and relax. However, high concentrations of ozone pollution in Door, Kenosha, Manitowoc, Milwaukee, Ozaukee, Racine, Sheboygan, Washington, and Waukesha Counties endanger the health of those who live, work, or recreate in those counties every time they go outside on summer days.

Unlike other ambient air pollutants, ozone pollution is a clear gas but its health impacts are no less important. Clean Wisconsin member Mary, a long-time Racine resident, joined Clean Wisconsin in 2016 specifically to support our work on clean air. She understands that the emissions we put in the air can impact everyone, whether or not we can see the pollution. Mary told us, “When we are dismissive of the environmental issues that are easy to ignore, the community suffers.”

Judy, a 77-year-old bird watcher and Clean Wisconsin member since 1996, knows that polluted air makes being outside less enjoyable—and unsafe. “If you’re going to breathe polluted air, something is going to happen.”

Since its inception, the Clean Air Act has been extremely effective at protecting people from the health impacts of air pollution, without negatively impacting the economy. From 1970 to 2017, aggregate national emissions of six major pollutants dropped an average of 73 percent, while gross domestic product grew by 324 percent. (For more trends information, see EPA’s Air Trends site.) 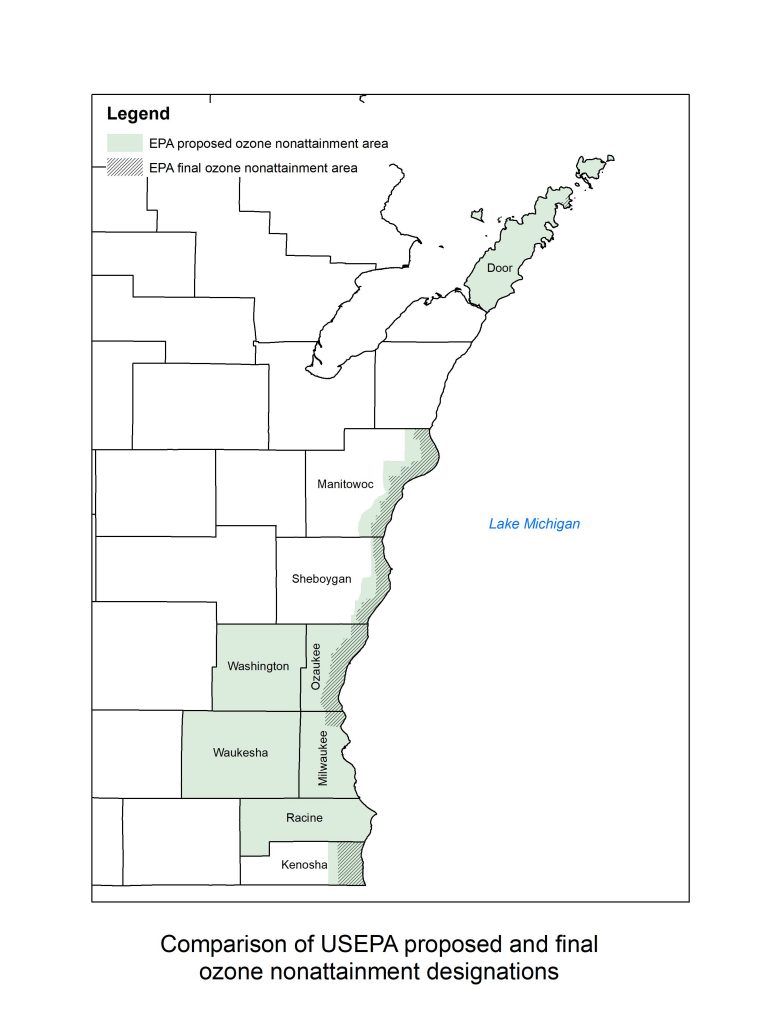 In December 2017, EPA identified all the areas indicated in green on the accompanying map as areas that fail to meet the health-based standards for ozone pollution established by the Clean Air Act. Less than six months later, EPA made significant changes and, in its final rule, designated only the areas indicated with hash marks as failing the health-based standards for ozone.

Clean Wisconsin is challenging the final rule because it does not protect the residents of the nine eastern Wisconsin counties, and it leaves children, the elderly, and people with respiratory conditions are especially vulnerable to the health impacts of ozone pollution. If our legal challenge is successful, EPA will have to return to its original proposal and require that all of the areas of Wisconsin shown in green on the accompanying map reduce their ozone.

This action is about making sure that all Wisconsinites have clean air to breathe so they can live happy, healthy lives. Everyone, no matter where they live, needs the same clean air. Thanks to the support of our members, we can defend the clean air that makes Wisconsin a great place to live, work, and play.

Want to get more involved? You can learn more about ozone pollution in Wisconsin at cleanwisconsin.org/our-work/our-air and spread the word about why clean air matters on social media using hashtags #ourairourhealth #cleanair #cleanwisconsin.