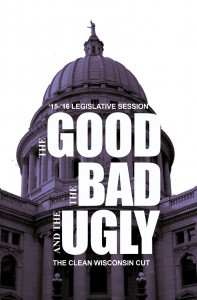 Now that the 2015-‘16 legislative session has ended, it’s time to reflect on how environmental protections fared in the state Legislature. While it’s easy to focus on all the bad proposals offered and the hard-fought battles over what should be commonsense protections, it’s worth remembering how much has been accomplished thanks to the hard work and advocacy by Clean Wisconsin and our partners and members.

Microbead ban signed into law Wisconsin was the seventh state to pass a law phasing out the manufacture and sale of personal care products containing microbeads, small pieces of plastic added to products like body scrubs and toothpastes. These tiny particles end up in our Great Lakes and waterways where they can threaten ecosystem health and human health. Clean Wisconsin led the efforts in Wisconsin by bringing our scientific knowledge of emerging environmental issues and our policy experience to pass this bill. The multitude of state microbead bans ultimately led the federal government to enact a nationwide ban.

Attempts to roll back groundwater protections failed – again For the second session in a row, one of the last actions the Legislature took was to essentially kill a bill that would have rolled back protections for our groundwater resources from the impacts of high-capacity wells. With high-capacity wells causing lakes, rivers and streams to dry up in some areas of the state, this bill would have given “forever” permits for groundwater use to a small group of agricultural interests at the expense of the public’s right to adequate water. The Assembly and Senate each passed different versions of the bill, and as of this writing Assembly leadership has said they won’t come back to vote on the Senate’s changes, effectively killing the bill. While we are pleased that groundwater protections weren’t rolled back further, we are extremely disappointed that the Legislature failed to act on any comprehensive efforts to solve this ongoing water problem, leaving no recourse but continued lawsuits to protect our water rights. We also expect groundwater will be a top focus for the next legislative session.

Navigable water law bill – significantly improved When it was originally proposed, SB 459/AB 600 would have drastically altered how Wisconsin deals with certain permitted activities in waterways. By working with legislators and other advocates, Clean Wisconsin was able to secure key changes to the bill that drastically softened its impact. Items such as dredging up to three dump trucks’ full of sediment from a lake and giving away publicly owned deeds to lakebed to private interests were stripped from the bill (see also “The Bad” below).

Efforts to privatize water utilities fail Early opposition by Clean Wisconsin helped kill a bill that would have made it easier for out-of-state, for-profit corporations to take over our municipal water systems. Aqua America, a Pennsylvania-based company, was pushing the bill so it could expand into Wisconsin.

Restored recycling grants The budget bill passed in 2015 contained a $4 million cut to recycling grants for municipalities to help pay for curbside recycling pickup and other local recycling efforts. On the last day of the session, a bill was passed to restore $3 million for those grants.

Attempt to upend the administrative rules process fails A bill that would have dramatically changed how state agencies regulate our air and water failed to pass. The bill would have particularly impacted DNR’s ability to enact environmental protections through the administrative rules process, which has been commonly used to put important measures, such as Wisconsin’s phosphorus rules, in place.

Stewardship freeze rejected  In his budget bill, the Governor originally proposed a 13-year freeze on the Stewardship program, which purchases and protects pristine lands for future generations. The Legislature ultimately restored funding for the program at $33 million annually.

Attempts to remove safeguards from fish farming thwarted The Legislature ultimately did not pass a bill that would allow fish farms to operate in virtually any public waterway and exempt them from the many permits currently needed to ensure our trout streams and headwaters are protected from the water quality problems that arise from these concentrated operations.

Cut to the Focus on Energy program A “PSC Reform” bill, which passed on the last day of session, will result in higher energy bills for businesses and homeowners by reducing the amount electric utilities pay into Focus on Energy, the state’s energy efficiency and renewable energy program, by $7 million. However, we were also able to prevent several even worse proposals from materializing that could have eviscerated the program altogether.

Navigable water law bill – wetland impacts While SB 459/AB 600 was significantly improved with respect to treatment of navigable waters, impacts to wetlands remain. In particular, the bill still makes it easier to build in Wisconsin wetlands, which provide critical functions for Wisconsin’s landscape such as providing habitat for waterfowl and other species, acting as a sponge for floodwaters, and filtering pollutants out of water (see also “The Good” above).

Removed state support for our parks The budget bill increased user fees to provide continued support for the Wisconsin state park system, but simultaneously removed all existing state funding for the system. This will make Wisconsin the only state parks system in the nation to be run solely by user fees and without state resources, which has proven to be an unsustainable model.

Reduced Intervenor Compensation The budget bill greatly reduced the amount of funding available for citizen groups like Clean Wisconsin to participate in utility proceedings at the Public Service Commission, where we routinely engage in issues to advocate for clean energy and energy efficiency, and to ensure our natural resources are protected.

Weakened shoreland zoning protections The state budget bill removed the ability of counties to enact shoreland zoning standards that are stronger than the state minimum standards, severely weakening most counties’ protections from the impacts caused to waters when structures are built too close to the shore.

Cutting 18 scientists and 11 educators from DNR Eliminated in the state budget bill, these staff focused on conducting research on issues impacting natural resource management and making sure DNR decisions are based in science, as well as engaging citizens and students in natural resource protection and awareness.

Wisconsin’s nuclear moratorium repealed Wisconsin’s nuclear “moratorium,” which simply required that any new nuclear power plant must be economically advantageous to ratepayers and provide safe disposal for radioactive waste, was repealed this session. Nuclear energy remains the most expensive form of energy for ratepayers, and should not be considered in the absence of stronger commitments to renewable energy and energy efficiency, which are much more cost-effective ways to achieve Wisconsin’s clean energy future.

Eliminated $8 million in state funding for UW-Madison Bioenergy Initiative The state budget bill eliminated $8 million for the Bioenergy Initiative, one of only three such energy research facilities in the nation.  The Wisconsin Alumni Research Foundation has given UW-Madison $3.5 million to keep the facility operating as a stopgap measure, but challenges remain for long-term funding.