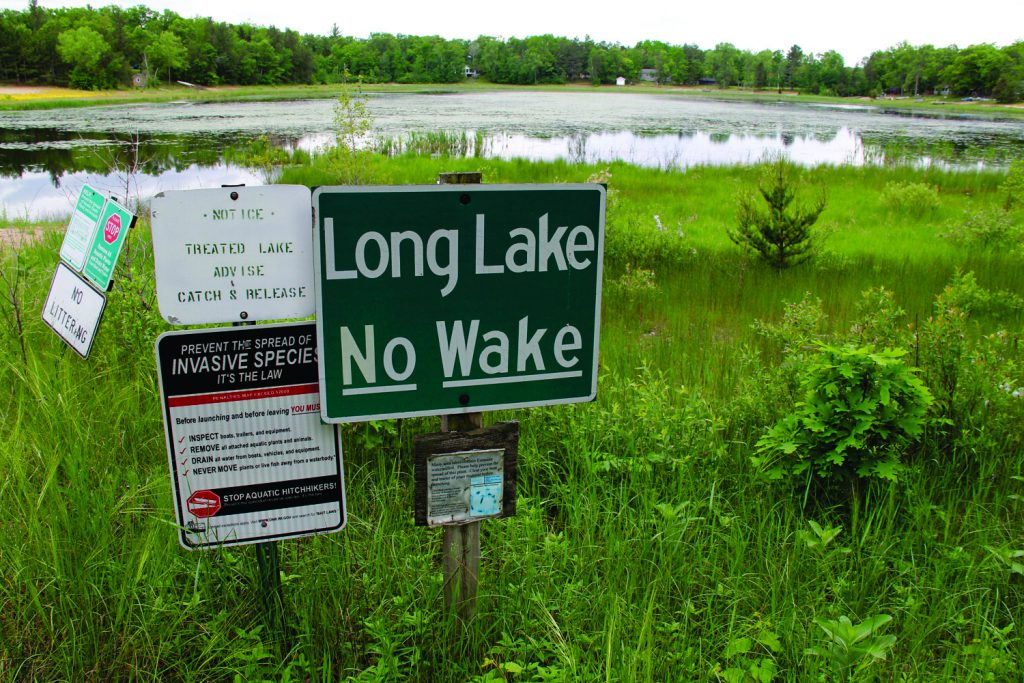 After years of hard work, and a long procedural delay, a pair of legal cases brought by Clean Wisconsin and its co-petitioners to protect Wisconsin’s water are finally being heard by the Wisconsin Supreme Court. The Court’s rulings in these cases will have a profound effect on how Wisconsin’s water is—or is not—protected.

In the first of these cases, Clean Wisconsin and its co-petitioner Pleasant Lake Management District filed a lawsuit in October 2016 challenging DNR’s decision to issue permits for proposed high-capacity wells despite knowing that those wells would harm rivers, lakes, and streams by depriving these surface waters of the groundwater that should naturally replenish them. The constitutional public trust doctrine places a duty on DNR to protect Wisconsin’s waters for all residents, and we argued that approving these wells violated that duty. In 2017, the Circuit Court agreed, and invalidated multiple well permits. This victory is critical for ensuring the sustainable management of Wisconsin’s precious groundwater resources.

The second case concerns Kinnard Farms, a large dairy farm in Kewaunee County. This farm, like all concentrated animal feeding operations, or CAFOs, must receive a water permit from DNR to operate. In a permit challenge dating back to 2014, Clean Wisconsin and a group of Kewaunee County citizens represented by Midwest Environmental Advocates argue that the permit is inadequate, because it fails to include a pair of important conditions that would help address drinking water contamination caused by the farm. We argued that DNR must use its full legal authority to address growing water quality problems, so all residents can safely drink the water coming from their taps. Both an administrative law judge and a circuit court judge agreed that DNR has the authority and duty to include those conditions in the Kinnard Farms permit.

Clean Wisconsin’s circuit court victories in both cases were appealed. In January 2019, the Court of Appeals declined to rule on these appeals, and instead asked the Supreme Court to rule directly on the important issues they raise. The Supreme Court accepted the cases in April 2019, and we expected a prompt resolution of both cases. As we noted in our update last year, around this same time DNR changed its stance in these cases, now agreeing with Clean Wisconsin on most issues and arguing that the circuit court rulings should be upheld.

Shortly after the Supreme Court accepted these cases, the Wisconsin Legislature moved to intervene as a party to both of our cases pursuant to authority purportedly granted to the Legislature by the “lame duck bills” signed into law by former Gov. Scott Walker in the twilight of his term. These bills aimed to hamstring the new governor and attorney general by taking away power that their predecessors had used for decades and, in some instances, giving it to the Legislature. The Legislature argued that it was entitled to intervene under one of these new laws simply because they disagree with how DNR was implementing the high-capacity well and CAFO permitting programs. Historically, the Legislature writes the laws, and then the governor and attorney general determine how to implement those laws. We argued that intervention in these cases would violate constitutional separation of powers principles that ensure that each branch of government does not impermissibly invade the role of another.

The Legislature’s motion to intervene ultimately sat before the Court for 21 months before it issued a ruling. Unfortunately, we learned on January 5, 2021, that the Court is allowing the Legislature to intervene as a party in both cases. This means that the Legislature will use taxpayer money to hire a private law firm to argue on behalf of powerful corporate interests who do not want to follow the law. This creates a dangerous precedent whereby a small number of individual legislators on a single legislative committee can vote to use public resources to further the agenda of narrow special interest groups hoping to evade environmental standards. Making matters worse, the Court did not explain why they are allowing the Legislature to intervene, much less how it is constitutionally permissible. This leaves groups like Clean Wisconsin, and Wisconsin’s citizens generally, unclear about when and why the Legislature can interject itself into lawsuits, including lawsuits with potentially massive impacts for Wisconsin’s environment.

Despite this troubling setback, however, we will make the strongest case possible before the Wisconsin Supreme Court, in briefs filed in February and in oral argument later in the spring. We hope for a written decision from the Court sometime before the end of 2021.